On Wednesday 22nd of April, LxDII hosted a lively online soirée on Zoom with members of CRiSAP (Creative Research into Sound Arts Practice) exploring our work on listening protocols. The aim of the session was to introduce the work on protocols done to date, and to explore and discuss how participants listen in their own research and practice, whether it be theory-driven or practice-based, using protocoling as a tool. 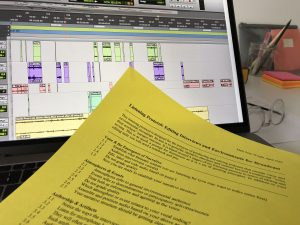 Salomé and Mark began by describing how LxDII conceives of protocols, using examples of protocols from project partners. Developing protocols has been a useful tool in evidencing approaches to listening embedded in the different forms of practice across disciplines and contexts. Some partners already have detailed protocols, such as auscultation (listening to lungs or other organs, usually using a stethoscope) and sound engineering. Others were inspired to create protocols from their conversations with Salomé and Mark. Specifically relevant to this discussion with CRiSAP members, Salomé discussed the potential for thinking of a protocol for listening as a tool for demonstrating listening as research in an education and research context, where expectations of artistic outputs can disadvantage creative practices of listening. 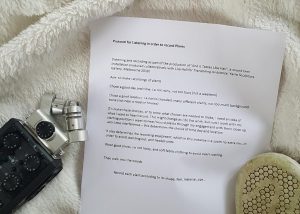 Prior to the soirée, participants were invited to prototype listening protocols for themselves, and share their drafts with us during the event. We were really excited by the responses to the task. The protocols were varied, ranging between solo listening practices and more social listening, between preparations for listening and acts of listening, and from formats that were informational and instructive to more critical or self-critical, and combinations in between. We had a lively discussion about the protocols people presented, but also about the process and idea of protocoling as part of practice. Participants generously shared their written protocols with us afterwards. As a result of the conversations and diverse approaches to the task, we’re taking time during lock down to focus more on this part of the research, and are thinking of ways to develop an online resource that intersects with our planned web platform for listening vocabularies, while also having relevance to our interlinking work on listening pedagogies.